Born at Lystra, Lycaenia, Timothy was the son of a Greek father and Eunice, a converted Jewess. He joined St. Paul when Paul preached at Lystra replacing Barnabas, and became Paul’s close friend and confidant. Paul allowed him to be circumcised to placate the Jews, since he was the son of a Jewess, and he then accompanied Paul on his second missionary journey. When Paul was forced to flee Berea because of the enmity of the Jews there, Timothy remained, but after a time was sent to Thessalonica to report on the condition of the Christians there and to encourage them under persecution, a report that led to Paul’s first letter to the Thessalonians when he joined Timothy at Corinth. Timothy and Erastus were sent to Macedonia in 58, went to Corinth to remind the Corinthians of Paul’s teaching, and then accompanied Paul into Macedonia and Achaia. Timothy was probably with Paul when the Apostle was imprisoned at Caesarea and then Rome, and was himself imprisoned but then freed. According to tradition, he went to Ephesus, became its first bishop, and was stoned to death there when he opposed the pagan festival of Katagogian in honor of Diana. Paul wrote two letters to Timothy, one written about 65 from Macedonia and the second from Rome while he was in prison awaiting execution. His feast day is January 26. 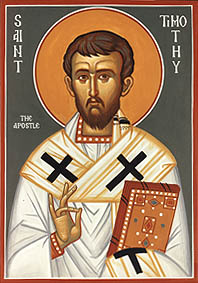 St. Timothy’s miracle and Martyrdom, and interpretation of his name.

Timothy is as much to say as holding dread. Or of timor, that is dread, and theos, a word of Greek, which is deus in Latin and God in English, as the dread of God.

S. Timothy was taken under Nero of the provost of Rome, and was grievously beaten, and had quicklime put in his throat and upon his wounds. And he rendered thankings to God with all his heart. And then two angels came to him, saying: Lift up thine head to heaven. And then he beheld and saw the heaven open, and Jesus Christ, which held a double crown, and said to him. Thou shalt receive this of my hand. And a man named Apollinarius saw this thing and did him to be baptized. And therefore the provost commanded that they twain together, persevering in the confession of our Lord, should be beheaded about the year of our Lord fifty-six.

Dear Saint, well known for your gentleness, you were a most faithful disciple of St. Paul and like him traveled much to bring the Good News to all people. The Letters Paul wrote to you reveal your zeal and inspire us with confidence in you. You too were cast into prison and you too gave your life for Christ. So with confidence we dare to ask: please obtain relief for N. if it be God’s will. Amen.

Lord God, You filled St. Timothy with apostolic virtues. Through his intercession may we live good and religious lives here on earth and thus be worthy of our heavenly home. Amen.

The Story and History of Saint Timothy

The story and history of Saint Timothy. Timothy was a convert of St. Paul. He was born at Lystra in Asia Minor. His mother was a Jewess, but his father was a pagan; and though Timothy had read the Scriptures from his childhood, he had not been circumcised as a Jew.

On the arrival of St. Paul at Lystra the youthful Timothy, with his mother and grandmother, eagerly embraced the faith. Seven years later, when the Apostle again visited the country, the boy had grown into manhood, while his good heart, his austerities and zeal had won the esteem of all around him; and holy men were prophesying great things of the fervent youth. St. Paul at once saw his fitness for the work of an evangelist. Timothy was forthwith ordained, and from that time became the constant and much-beloved fellow-worker of the Apostle.

In company with St. Paul he visited the cities of Asia Minor and Greece – at one time hastening on in front as a trusted messenger, at another lingering behind to confirm in the faith some recently founded church. Finally, he was made the first Bishop of Ephesus; and here he received the two epistles which bear his name, the first written from Macedonia and the second from Rome, in which St. Paul from his prison gives vent to his longing desire to see his “dearly beloved son,” if possible, once more before his death.

St. Timothy himself not many years after the death of St. Paul, won his martyr’s crown at Ephesus. As a child Timothy delighted in reading the sacred books, and to his last hour he would remember the parting words of his spiritual father, “Attende lectioni – Apply thyself to reading.”

The Feast Day of Saint Timothy is January 26. The origin of Feast Days: most saints have specially designated feast days and are associated with a specific day of the year and these are referred to as the saint’s feast day. The feast days first arose from the very early Christian custom of the annual commemoration of martyrs on the dates of their deaths at the same time celebrating their birth into heaven.